Kevin Harvick after snapping 65-race winless streak: 'Everybody who doubted us doesn't know us' 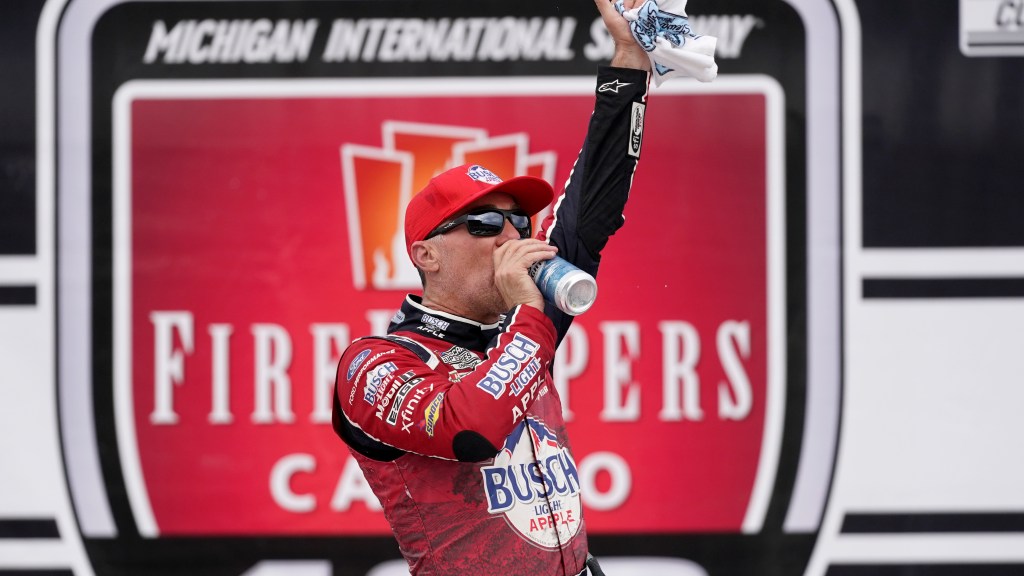 Kevin Harvick’s rough winless streak in the NASCAR Cup Series finally ended after the No. 4 Stewart-Haas Racing Ford driver won Sunday’s rain-delayed FireKeepers Casino 400 at Michigan International Speedway. This is a big, big deal for a couple reasons. First, there are now only three regular-season races remaining before the playoffs begin, and with Harvick’s victory, the pressure has only intensified on those looking to make the top-16 driver postseason cut. Currently, there are 15 different race winners, who have already made the playoff field — for now, because things could change if there are more than 16 different regular-season winners. RELATED: What happens is NASCAR has more than 16 winners eligible for the playoffs? But second, and most importantly for Harvick, not only did he steal one of those playoff spots from the other drivers on the bubble with him, but he also snapped a 65-race winless streak dating back to September 2020. “It’s been a while,” Harvick told NBC Sports about savoring the moment at one of his best tracks. Sure, Harvick won a series-high of nine races in 2020, but since the playoffs that year, he had hit a bit of a rough patch. He was winless in all 36 races in 2021 and winless through the first 22 events this season. Until Sunday, when he grabbed the checkered flag after leading 38 of the race’s 200 laps on the two-mile Michigan track. And after his long-awaited victory, the 46-year-old driver had a message for all his and the No. 4 team’s doubters: “Everybody who doubted us doesn’t know us.” Harvick continued to NBC Sports: “They, obviously, know we thrive in these types of situations. And a lot of things went our way today, which we haven’t had, all year long, have things go our way and have things fall our way. “And then there at the end we pitted, didn’t go a lap down, and the caution came out, got control of the race. That’s the thing I struggled with the most today, was traffic and the restarts and just having to make up ground. Once I got clear track, that baby was hunting.” Harvick finished first ahead of pole-winner Bubba Wallace, Denny Hamlin, Joey Logano and Ryan Blaney, who rounded out the top-5 finishers. It was the first win for a Ford driver since Logano’s early June victory at World Wide Technology Raceway at Gateway and just the fifth Ford win of the season. And as far as the playoffs go, the No. 4 team’s victory pushed sixth-place finisher Martin Truex Jr., who’s winless this season, out of the playoff picture. Blaney is in, for now, but he desperately needs a victory to secure his spot. Your browser does not support iframes. With so much on the line for the postseason, plus the winless streak surely hanging over him, Harvick seemed beyond relieved after the win. And when NBC Sports asked him if this was his most clutch win, Harvick nonchalantly said: “Just good timing for sure. You know, we’ve had several good runs the last few weeks, Loudon, and Pocono where the car ran good and just didn’t have everything work out. “So just really proud of everybody on our Busch Light Apple Ford Mustang. They’ve been digging along all year long, trying to make these Mustangs run faster. They haven’t been great this year, but our guys have done a good job in trying to take what we have, maximize it and do the things that we need to do. Just really proud of everybody at Stewart-Haas Racing.” The NASCAR Cup Series regular season closes with upcoming races at Richmond Raceway, Watkins Glen International and Daytona International Speedway. The 10-race playoffs begin in September with the Southern 500 at Darlington Raceway.