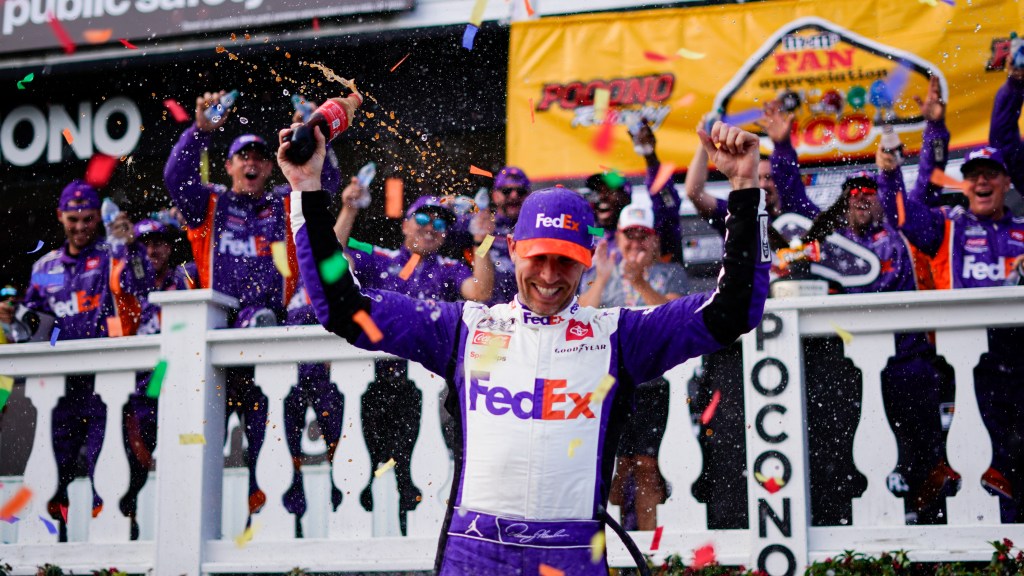 An exceptionally strange Sunday at Pocono Raceway in Pennsylvania had bettors and sportsbooks rushing to review their house rules on grading bets hours after the checkered flag was waved. Despite crossing the finish line in first place, Denny Hamlin officially did not win the M&M’s Fan Appreciation 400. NASCAR officials failed Hamlin’s car in a post-race inspection and were forced to disqualify the driver. The second-place finisher, Hamlin teammate Kyle Busch, also saw his car fail the post-race inspection. That meant Chase Elliott, who crossed the finish line third, was officially named Sunday’s winner. It remains quite a controversial decision. But for most sportsbooks this had zero impact. And it’s another textbook example of why bettors should always read the house rules before wagering on a specific sport. The vast majority of books will grade winners based on who is celebrating on the podium at the end of a race. At DraftKings, Hamlin and Elliott were graded as winners thanks to one of the most bettor-friendly policies in motorsports: “All markets will be initially settled based on the unofficial results sent out by NASCAR. If, after post-race inspections are completed, there is any change in the official race result, all previous winners will stand and new winners will also be settled as won. Any subsequent inquiries/disqualifications after the official post-race inspection will not affect settlement.” “It’s about doing what’s best for our customers,” DraftKings Sportsbook Director Johnny Avello told VSiN’s Adam Burke. “The rule allows for various payouts.” It was a fortunate break for NASCAR bettors who used the platform. It was also extremely rare. According to NASCAR, it’s the first time a Cup Series winner has been disqualified since 1960.