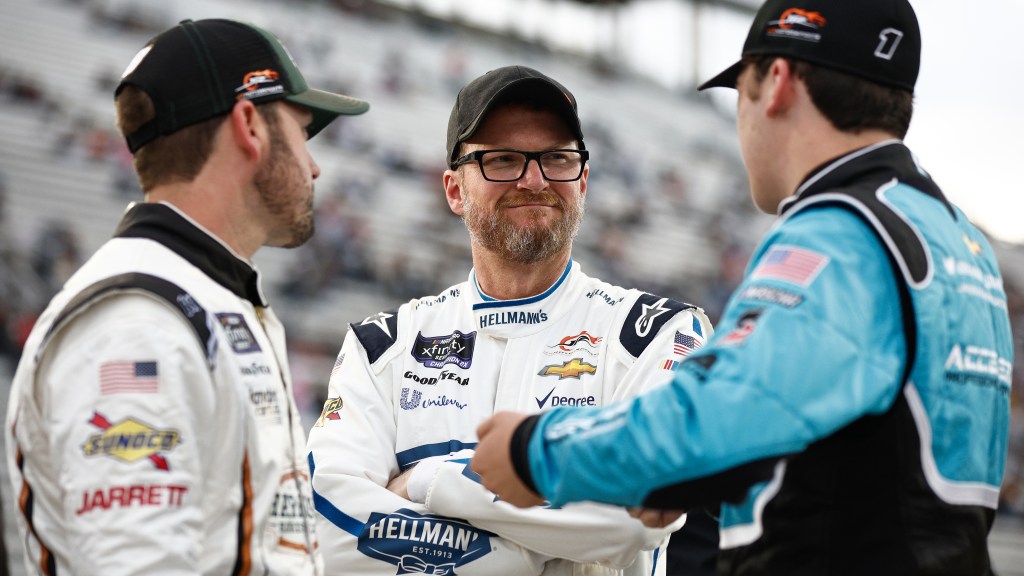 The ‘biggest barrier’ for Dale Earnhardt Jr.’s NASCAR Xfinity team to make the jump to Cup

JR Motorsports, Dale Earnhardt Jr.’s NASCAR team in the second-tier Xfinity Series, is seriously looking at how to make the jump to fielding a car in the top-tier Cup Series. The team wants to go Cup racing, Kelley Earnhardt Miller, the team’s co-owner and Dale Jr.’s sister, told SiriusXM NASCAR Radio on Tuesday. But it’s still evaluating not only how to successfully do this, but also, and perhaps most importantly, when. It’s no secret that it’s awfully expensive for teams to race in the Cup Series, and Dale Jr. has repeatedly said in the past the cost of entering the top series is largely prohibitive, particularly because of the 36-team charter system. Speaking to SiriusXM NASCAR Radio, Earnhardt Miller echoed those sentiments and expanded on what it might take for JR Motorsports to join the Cup Series. She explained: “We’re thinking about it every day. We’re working on it, feels like every other day. We do want to go Cup racing. We do believe that that’s a good spot for us. We want to stay in the Xfinity Series too, so what that looks like is certainly up for grabs. But we definitely are just trying to — the biggest barrier is that charter cost and just looking at the business model and trying to figure out sponsorship and trying to really make that leap. “Because I think right now, we saw it last fall where there was a high demand for charters and a lot of conversations went on and a lot of purchases went on. And I don’t think there’s a lot of charters up for grabs at a reasonable cost right now.” Extended through the 2024 season, NASCAR’s charter system has 36 cars that are guaranteed entries for every Cup Series points race and notable financial benefits. Teams can sell their charters as they like, but there’s a hefty price tag that comes along with them. In 2021, Dale Jr. shared his thoughts on the charter system, reiterating that the price tag rumors are simply way too high. Last summer on his podcast, the Dale Jr. Download, he said he thought charters were going for $5 million or $7 million but had since heard “it’s north of $10 million.” “JR Motorsports ain’t gonna be racing no Cup Series if that’s what the charters are going for,” he said in 2021. Last month, Dale Jr. again addressed the state of the charter system and JR Motorsports’ potential for acquiring one during an episode of his podcast. While speaking with team owner/driver Denny Hamlin, Dale Jr. said: “We have talked to every single person that is in the industry about this — about what is the options, what routes are there to take. That initial purchase of the charters isn’t the scary part. They are worth what they are, right? You’re buying something that you hope is going to continue to gain value. That’s great, right? I’ll invest that money if it’s going to be worth more tomorrow. “But it’s not knowing the cost of racing and how much that’s gonna be, not knowing exactly how much sponsorship you’re going to have to acquire to offset that cost and not knowing what the new agreement’s going to be. I’m with Denny in feeling that the owners deserve a bigger piece of the pie. That’s the only way it’s going to entice people like me.” And that’s the sentiment and strategy Earnhardt Miller expressed this week, as well. It’s all about timing, and much of that is related to NASCAR’s upcoming media rights talks, as its deal with FOX Sports and NBC Sports is set to expire at the end of the 2024 season. Earnhardt Miller continued to SiriusXM NASCAR Radio: “ just trying to make that pencil out and make it work and figure out when that right time of entry is, and you’ve got the next couple of years with the TV contract coming down and all those kinds of things. Just it’s like, when’s the right time to strike? And so that’s just really what we’re trying to work through and figure out. “Right now, we’re focused on re-signing our guys for Xfinity for next year and re-signing our sponsors, and then if we have the opportunity to do some Cup racing and kind of put our toe in the water and kind of see. I don’t think we’ll be Cup racing full time for 2023 — that’s for certain, unless something amazing happens and something really awesome falls out of the sky. But right now, our sights are set beyond that, and we’re just really trying to figure it out and make it pencil.” So obviously, it’s unclear if or when JR Motorsports will join NASCAR’s top series. Maybe it’ll start with a handful of Cup races in 2023 before expanding, or maybe it’ll jump in right away with a charter and a full-time car in 2024 or beyond. But at least now NASCAR fans and JR Nation know the team is seriously eyeing the Cup Series.

NASCAR: Daniel Suarez taking driver safety to the next level

NASCAR: The other driver who could be screwed by the playoff system