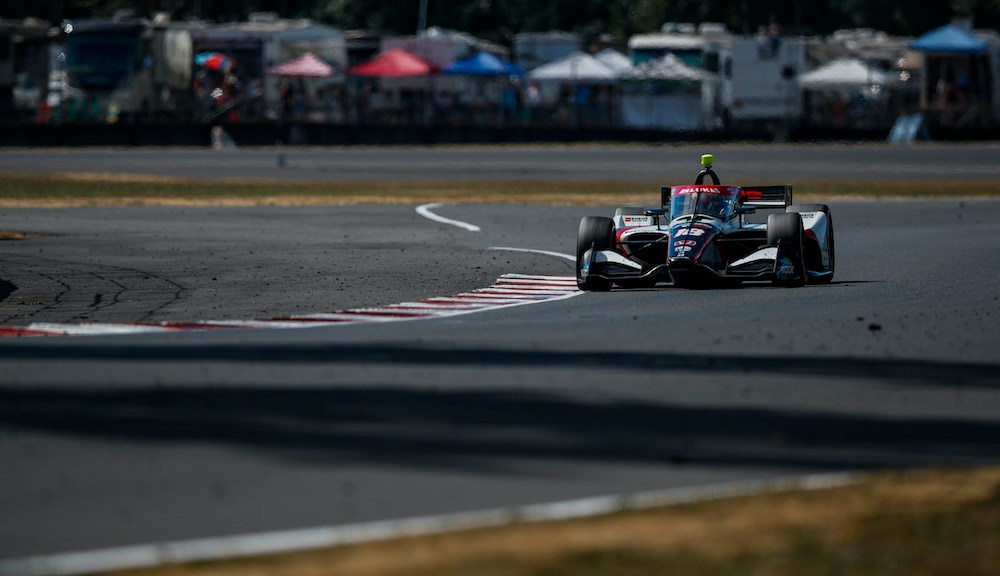 Dale Coyne and his partners at HMD Motorsports and Rick Ware Racing have a plan in mind for next season that would see the Honda-powered team continue with two full-time entries and expand to run a third car on a part-time basis. The next step for the Illinois-based squad is to solidify those plans in a timely manner which, as each offseason reaffirms, involves plenty of waiting and hoping for everything to work out as desired. “We’re waiting on Honda to see what they can do for a third car,” Coyne told RACER. “That’s really the piece that has us locked up right now. We’ve got drivers we’re talking to about a full-time program, and obviously, talking to a driver about an oval-only program. But until we know what Honda will allow us to do, we’re not ready to make those final decisions.” So far, one entry among DCR’s three-car ambitions is confirmed. Rookie standout David Malukas, who is signed to a two-year deal, is returning to the No. 18 DCR with HMD Motorsports Honda for his sophomore season and is already regarded as one of the top drivers who will be pursued by DCR’s rivals on the approach to 2024. The No. 51 DCR with RWR entry piloted last season by Takuma Sato is where the most immediate change is anticipated. Multiple drivers, including new Indy Lights champion Linus Lundqvist, are in the mix to drive the No. 51 Honda but all are expected to bring the majority of the operating budget required to secure the seat. Sato, if everything works out as intended, would move to the oval-only role with support from RWR. Asked if he was seeking a driver to contest road and street courses in a third car, Coyne said “I don’t see Honda stretching that far. To go to two-and-a-third cars is the step they’re probably willing to take. But I don’t know if they’re willing to go to three cars yet. Again, we’re waiting to see what Ganassi does. Is he going to run three or four next year full-time? I don’t think anybody knows the answer to that.” In the meantime, Coyne would like to test more drivers for the No. 51 opportunity, but only has one more ‘evaluation’ day to use after running Marcus Armstrong and Danial Frost in October at Sebring. “We’ve got one day left so we have to be very careful about how we use that,” he said. “I’d like to be done so I know what I’m doing, but with only one day left… I’d like to have three more days right now. I can’t afford to waste my last evaluation day. I need to keep that in my pocket in case something pops here with a driver at the 11th hour.” Along with finalizing DCR’s drivers for next season, the team is also in the midst of completing its staffing needs for 2023. Two key members of the team are headed to new homes, with Malukas’s race engineer Ross Bunnell awaiting confirmation at Chip Ganassi Racing and renowned chief mechanic Todd Phillips, who won numerous Champ Car titles at Newman/Haas Racing, moving on after many years with DCR. RACER has confirmed Phillips, who spent last season as the crew chief on Sato’s the No. 51 Honda, will partner with Alexander Rossi as the chief mechanic on the No. 7 Arrow McLaren SP Chevy. Along with Bunnell, who follows Craig Hampson, Michael Cannon, and Olivier Boisson as the latest high-caliber race engineer to leave for bigger teams, DCR will have big shoes to fill with the loss of Phillips. “You wrote us off when Craig Hampson left us,” said a feisty Coyne when asked about Bunnell and Phillips. “You wrote us off a little bit after Olivier left us, so don’t write us off. Our roster will be bigger next year than it is this year. We’ve got good people, and we’ll be just fine.”