Historic MXGP for Yamaha in Finland 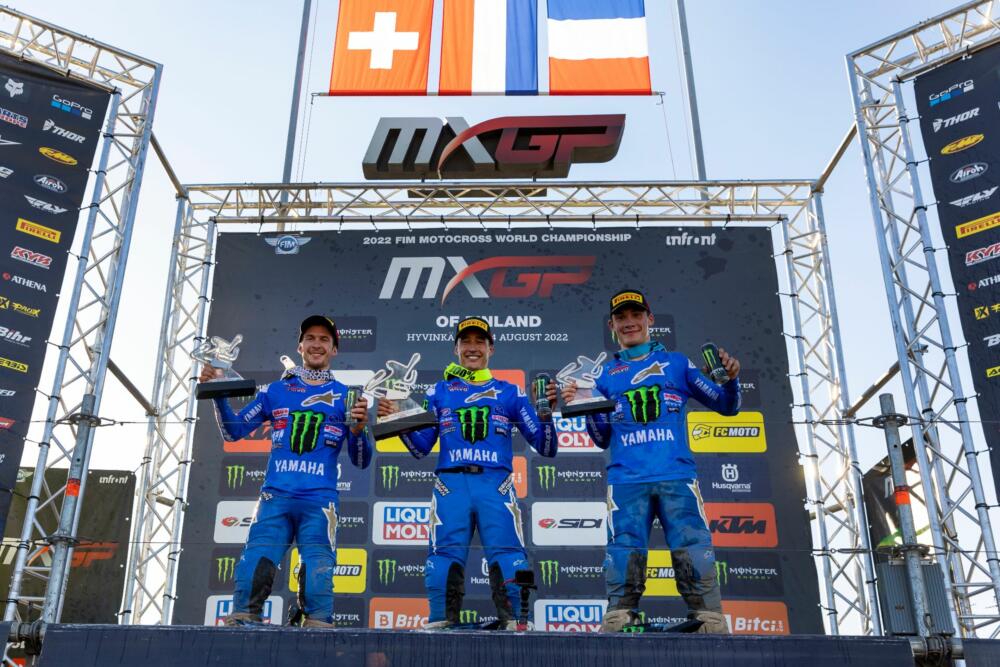 The Monster Energy Yamaha Factory MXGP team celebrated its most successful Grand Prix ever, with its full line-up of riders sweeping the podium at the 16th round of the FIM Motocross World Championship in Hyvinkää, Finland. The round was won by Monster Energy Yamaha Factory MXGP’s Glenn Coldenhoff, who powered his YZ450FM to a solid 2-1 finish for his first overall victory since the Grand Prix of Latvia in August 2020. Making it a fairytale finish for Yamaha and the team, the Dutchman was joined on the podium by teammates Jeremy Seewer and Maxime Renaux, who tied on 40-points for second overall. Stifling hot temperatures added an extra element to an already challenging sand circuit, making the MXGP of Finland the ultimate test of man and machine. Making his 190th Grand Prix appearance, 31-year-old Coldenhoff proved he still has what it takes. The ‘259’ put in an incredible performance in race one, as he stormed from outside of the top-five to finish second after an exciting duel with Renaux, who had charged from 10th to third. Seewer had the best start of the trio but fell from third on lap 6. He fought back to finish fourth. Coldenhoff stormed to an emotional flag-to-flag victory in race two after taking the holeshot ahead of his fast-starting teammate, Seewer. Seewer was squeezed at turn-one and shuffled back to fourth but inherited a position from Romain Febvre before passing Henry Jacobi for second. Hyvinkaa presented uncharted territory for the rookie Renaux as the venue has only hosted two rounds of the World Championship in the past 20 years – in 2013 and 2014, which was before the young Frenchman had started racing internationally. Nevertheless, the ‘959’ quickly adapted and, despite two mediocre starts, put in two impressive performances for a 3-3 scorecard and third overall. Boosting Yamaha’s success, Riley Racing Yamaha’s Brent Van Doninck and Gebben Van Venrooy Yamaha’s Calvin Vlaanderen rounded out the top five positions, respectively, ensuring a historic ‘blue-wash’ of the top-five in MXGP race two. As a result, Yamaha has successfully extended its lead in the Manufacturer’s World Championship. Coldenhoff’s triumph sees the ‘259’ move up to third in the MXGP Championship standings. Seewer remains second, while Renaux rounds out the top five. The Monster Energy Yamaha Factory MXGP team will now head 3200 kilometers south to Saint Jean d’Angely, France, for the penultimate round of the series. Glenn Coldenhoff MXGP of Finland winner, 47-points “It was a good weekend. I have waited way too long for this. I have always believed in myself, and I know I am capable of being here and doing this. I am just really happy. This is my first win with the Yamaha as well, and it’s really nice to pay them back with this victory. They have put in big effort to help me get here, and in the last few weeks it has really paid off. Now, I am celebrating with my teammates! Does it get any better?” Jeremy Seewer 2nd MXGP of Finland, 40-points “I am in good form at the moment, everything is clicking, even today on this track, which was not my favourite. I’ve had three GP wins now, but because this was not my type of track, I achieved my goal of two solid moto’s with no big mistakes to finish on the podium with my teammates. Two GP’s to go, the season is not finish. I know I am in good form and there is still some good racing ahead at some really nice tracks, so I look forward to it.” Maxime Renaux 3rd MXGP of Finland, 40-points “It was a really nice day for Yamaha. We made history today, with it being the first time we had three Yamaha riders on the podium in the MXGP class. Today, the result with two third-place finishes is really good, but I still want to go for more. I believe I can still fight for the championship podium. Glenn just took over third, so there will be some interesting races coming up and we will all fight hard for it.” Words and image: Yamaha Racing The post Historic MXGP for Yamaha in Finland appeared first on GateDrop.com.