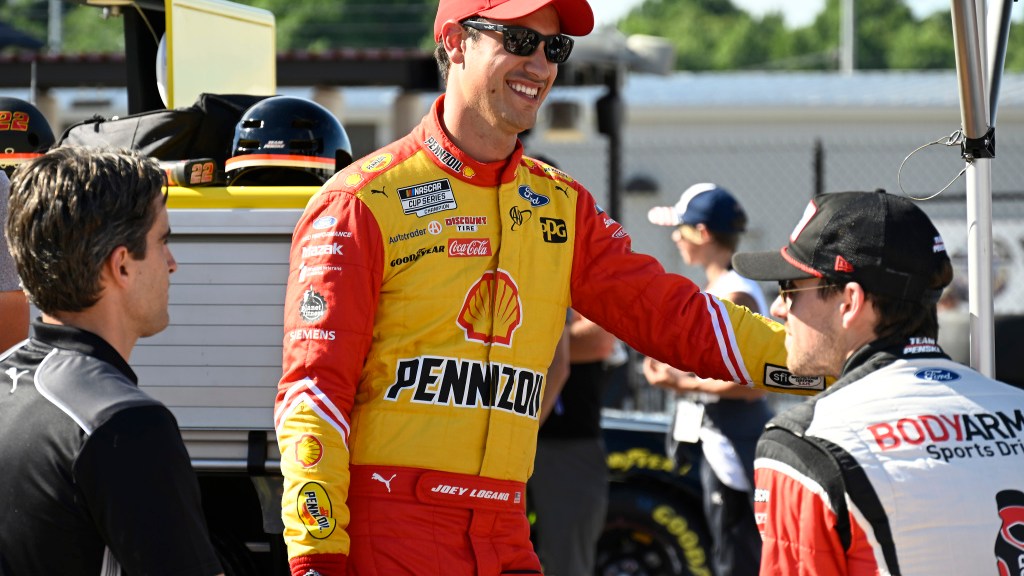 Joey Logano was on a Sunday drive at Richmond Raceway through much of the Federated Auto Parts 400 and looked much better than his sixth-place result. His No. 22 Team Penske team can’t control the weather, though. The 400-mile race started at 3:17 p.m. ET under sunny skies and ended after 6 p.m. with the lights on. Logano won the second stage, which ended on lap 230. Deep into the final stage, he was still in control and racked up the most laps led at 222, but it was in the final stage that the temperature started to cool as clouds moved into the area. As the clouds were moving in, so too did Kevin Harvick. The Penske driver lost the lead to Harvick on lap 334 and never got it back. After the final round of green flag pit stops, Logano was further behind with a gap of three seconds and sitting third. “It seemed like we had the car to beat there early in the race coming from 17th and winning the second stage and I felt pretty good about it,” Logano said. “The No. 4 got better, and we did not. I think as the track cooled off, we kind of lost our strength, which was turn in the center. Once we lost that turn — we never really had drive off all day — so once we lost that, they had us beat, and then we fell back even out of the top five. “We probably didn’t stay up good enough on the adjustments. I want to run the weekend over again because I feel like we probably could have tried a couple of different things to be better. Overall, we still have to be proud of the last couple of weeks. We’ve run up front, given ourselves chances to win, and winning a stage to get that playoff point is still a good thing.” Logano was dominant at Richmond. His 222 laps led were far more than the next driver, Ross Chastain, who spent time at the front. Chastain led early in the first stage for 80 laps. Harvick led 55 on his way to winning. The No. 4 car led when it mattered as Logano’s car fell off, and it’s not that the Penske crew didn’t make adjustments throughout the race, but Logano laughed when he said they didn’t make enough as the track cooled. “It happens every night,” he said.