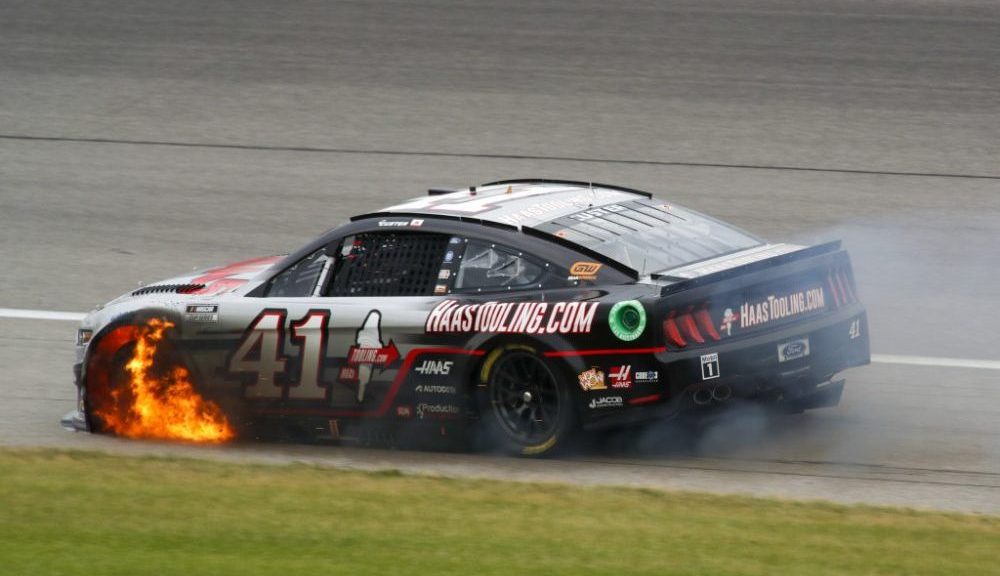 NASCAR officials are continuing to work on a solution after a rash of fires with Next Gen cars in recent weeks. Chris Buescher’s was a notable incident at Indianapolis Motor Speedway. Chris Buescher’s RFK Racing Ford caught fire before his first pit stop at Indianapolis Motor Speedway, but he stayed in the car and returned to finish 10th. The fire resulted from on-track body-to-body contact with Bubba Wallace, which crushed rocker box pieces on the No. 17 Ford and with everything melted shut, led to a fire with the door foam. Team Penske driver Joey Logano ended the day at Indianapolis with his Ford on fire from seemingly the same issue. A week later, Cole Custer’s Stewart-Haas Racing Ford went up in flames under the left front at Michigan International Speedway (pictured above). It was believed that the three flat tires Custer suffered during the race played a part in the fire starting, but NASCAR officials were investigating last week. Before the events at Richmond Raceway, officials had Cup Series teams implement a new piece on the exhaust system in hopes of stopping a fire if something were to be compromised during competition. “We’ve obviously been looking at that very closely,” NASCAR Cup Series managing director Brad Moran told SiriusXM NASCAR Radio Tuesday morning. “We know what created some of the issues at Indy – crushing in the rocker panel and moving the exhaust creates a few other issues.” Chase Briscoe’s Stewart-Haas Racing Ford caught on fire in the third stage at Richmond. The fire appeared to start from the right-side exhaust, and Briscoe had to make a second pit stop for the team to clear smoke out of the cockpit. “We’ve come up with the first part of a multi-stage correction, which it seemed like it helped,” Moran said. “Unfortunately, the 14 had some issue where it seemed they did have something start on fire. We had our R&D folks yesterday I haven’t got the full update, but we’re working on it. “Obviously, it’s on our top priority to figure out what’s . It’s a different issue than what we had at Indy, but we’re still looking at it to get it corrected, and it’s part of a multi-stage . We could have changes coming as early as this weekend as well as for Daytona. We’ve got a big group of engineers working on that.”

Hispanic Community Looks To Daniel Suarez As A Guide To NASCAR