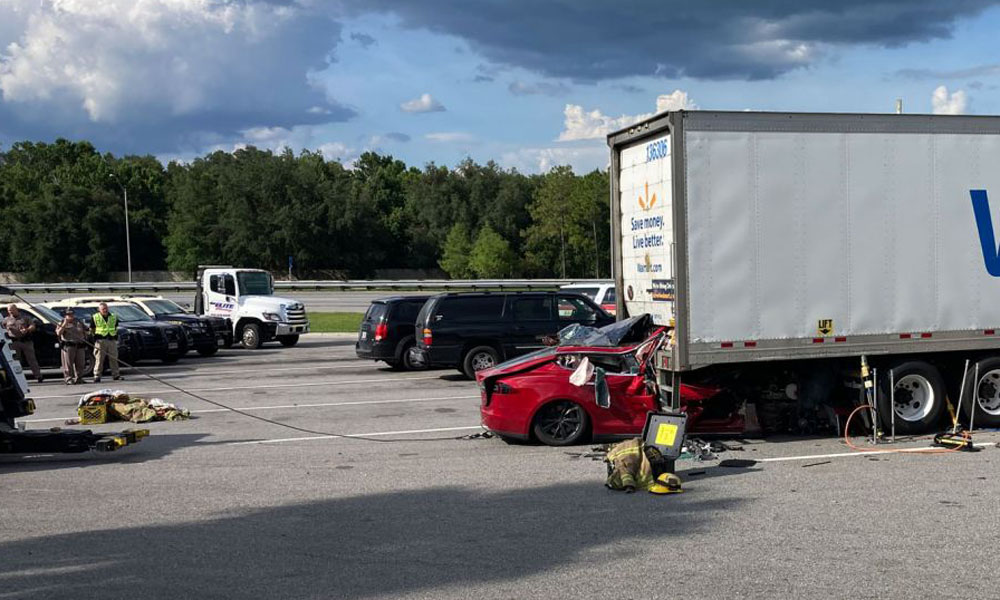 A Tesla crash that killed a California couple last week will be investigated by the National Highway Traffic Safety Administration, the agency announced. In the crash last Wednesday, a 2015 Tesla ran into the back of a parked tractor-trailer at an interstate rest area near Gainsville, Florida. The crash killed the Tesla’s occupants: driver Mary Lou Seelandt, 66, and her husband, Karl Seelandt, 67, from Lompoc. A Florida Highway Patrol spokesman said it was unclear if the car’s driver-assistance Autopilot feature was in use. Since 2016, NHTSA has opened 36 special investigations of Tesla crashes in which driver assistance systems were suspected of being in use. The highway patrol’s report on the crash said that the Tesla left southbound Interstate 75 at the Paynes Prairie Rest Area just before 2 p.m. July 6. Where the exit split into two lanes — one for cars, the other for trucks and buses — the Tesla veered toward the truck lot. It ran into a parked Walmart truck; the front of the Tesla went under the trailer, and its roof was crushed by impact with the lower edge. The couple were pronounced dead at the scene. The truck driver, a 58-year-old man from Ruskin, Florida, was not injured. The Seelandts were on a long driving trip that included their granddaughter’s first birthday party, in Georgia, the Orlando Sentinel said. The couple were both retired. Mary Lou Seelandt was an elementary school teacher in the Lompoc area until 2016; Karl Seelandt, a former Air Force test pilot, finished his career in the aerospace industry. Both were described as avid distance runners. Karl Seelandt competed several times in the Boston Marathon, including in the 2013 running at which three people were killed in a terrorist attack, the Lompoc Record said. The Sentinel report said the Seelandts’ family retained the personal-injury law firm Morgan & Morgan to look into the crash. Also last week, NHTSA confirmed it had opened a special investigation into a June 7 crash in San Diego in which a Tesla Model 3 fatally struck a pedestrian. The car ran a red light, hit a dip and became airborne before striking the woman, the San Diego Union-Tribune reported. The driver was arrested on suspicion of driving under the influence of drugs; it is not known whether Autopilot was engaged. Related Articles Crashes and Disasters | Tech-linked layoffs eliminate more than 600 Bay Area jobs Crashes and Disasters | Elon Musk ‘terminates’ $44 billion Twitter-purchase deal, Twitter promises court fight Crashes and Disasters | US safety agency probes death of pedestrian struck by Tesla in California Crashes and Disasters | Tesla wrecked engineer’s reputation with false claim of secrets theft: lawsuit filing Crashes and Disasters | California exodus accelerated during Covid-19 pandemic, study shows