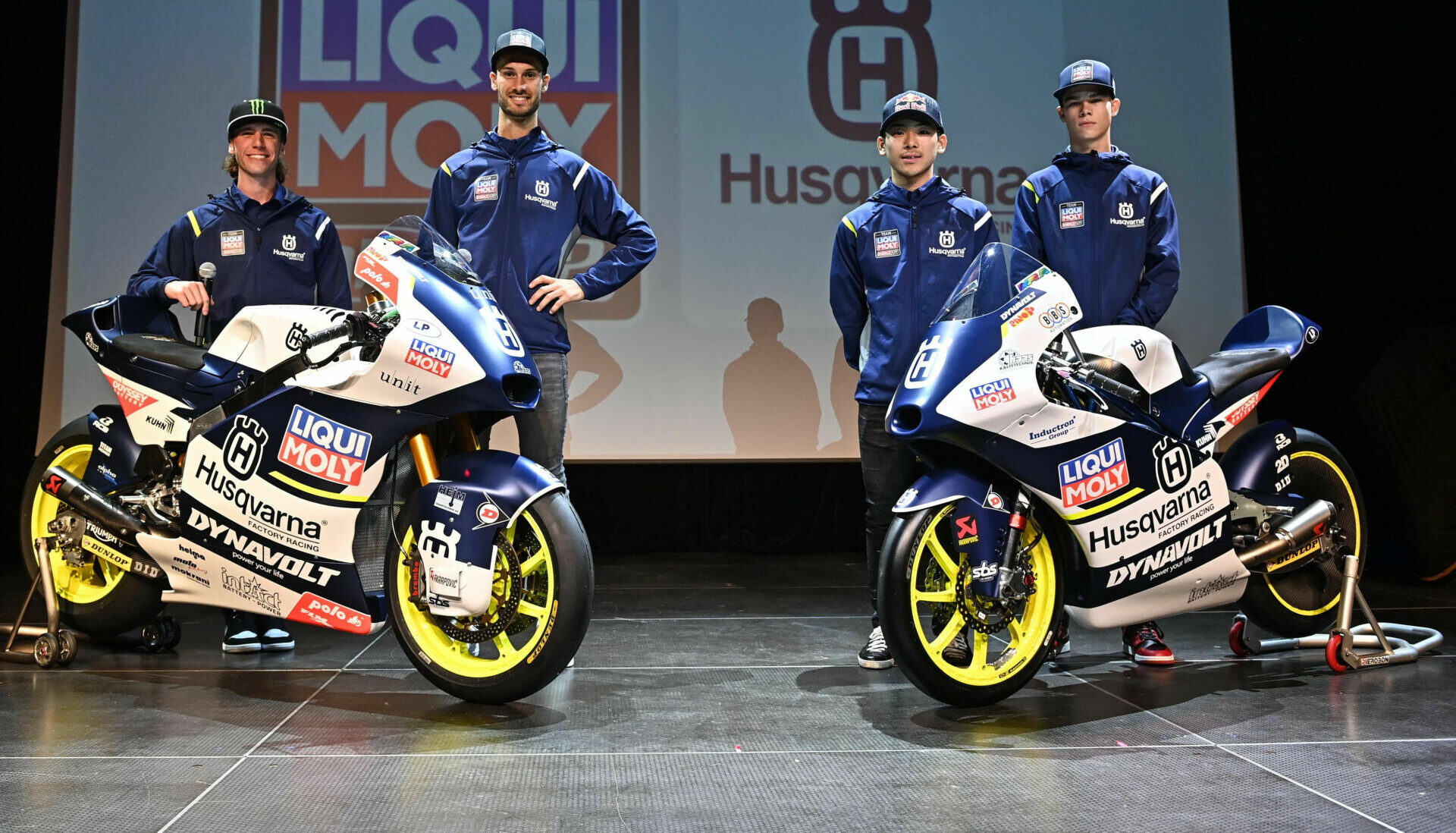 HUSQVARNA MOTORCYCLES CASTS AWAY THE COVERS OF AMBITIOUS 2023 GRAND PRIX ROAD RACING EFFORT IN THE SWIFT WAKE OF ITS MOST SUCCESSFUL SEASON AS PART OF THE MOTO3 WORLD CHAMPIONSHIP, HUSQVARNA MOTORCYCLES HAS UNVEILED THE COLOURS FOR 2023 AND THE PROJECT TO ENTER TWO CATEGORIES NEXT YEAR The LIQUI MOLY Husqvarna Intact GP team welcomed guests, staff and riders to their base in Memmingen, Germany last week and threw away the covers from the FR 250 GP technology that will contest the Moto3 class (in the hands of racers Ayumu Sasaki and Collin Veijer) and the machinery that will front Husqvarna Motorcycles’ debut in the Moto2division (Darryn Binder and Lukas Tulovic on board). The brand has doubled down on their presence in the MotoGP series for 2023, encouraged by the results and progress of the Moto3 wing this year; notably the three wins in the Netherlands, Austria and Malaysia by Sasaki and John McPhee and a total of ten GP podium appearances. The meeting at Sepang, Malaysia, in particular, was a highlight thanks to the 1-2 classification by the Briton and the Japanese. Sasaki showed world championship form in the second half of the 2022 campaign and was one of the star draws during the gathering in Germany. Together with fresh team management the riders presented the new-look race bikes for the first time and the shade of Husqvarna Motorcycle white, blue and yellow that will be seen in winter testing and throughout the 21 dates of the 2023 calendar. Ayumu Sasaki: “2022 has been a lot of ups and downs for me, I had some injuries at the beginning of the year but luckily in the second part of the season, we had some fantastic races: we achieved nine podiums, and two wins and it turned out to be the best season in my career so far. Next year I am aiming to be within the top 3, if possible to fight for the championship, and I will do everything I can to achieve that.” Collin Veijer: “I had an incredible season, especially at the start of the Red Bull MotoGP Rookies Cup as I got my first podiums in the first couple of races. In FIM JuniorGP, I sustained an injury in the first race but in the summer break, we trained a lot and tried to fix everything which resulted in two victories in the category and three wins in the Rookies. I am super happy with 2022 and can’t wait to start this new adventure. I hope to learn a lot from Ayumu next year but I need to make my own experiences and learn to improve myself from them.” Darryn Binder: “It was a great opportunity to go straight to MotoGP in 2022 but I am very happy to be coming to Moto2 for the very first time. It will be another new adventure for me and I am hoping to make the most of it. I am really happy to join this team as there have been talks before and so it’s great to finally come together. I am super-excited to get the 2023 season started and I hope that I can put all the experience I’ve gained in MotoGP this year into Moto2 and make the most of it and hope to secure some good results. When I first tested the Moto2 bike, it felt really good. I felt comfortable really quickly and after three days I already started to build up a good feeling. Step-by-step I understood what the Moto2 bikes needs and it’s cool not to worry about too much electronics because you can just go out, ride and work on the setup. focus on your riding and improve with every exit. The testing was really positive which is why I can’t wait to get the season started.” Lukas Tulovic: “I love the new colours of the bikes and I am sure we will stand out from the crowd. In the European Championship we were already at world championship level on some tracks and based on the riders who have entered Moto2 in 2022, I think you can also expect us to be in the top third of the pack. Of course we have to make steps and improve over the seasonbut my goal is the top 10.” The post Husqvarna Introduces 2023 Moto2 And Moto3 Teams In Germany appeared first on Roadracing World Magazine | Motorcycle Riding, Racing & Tech News.