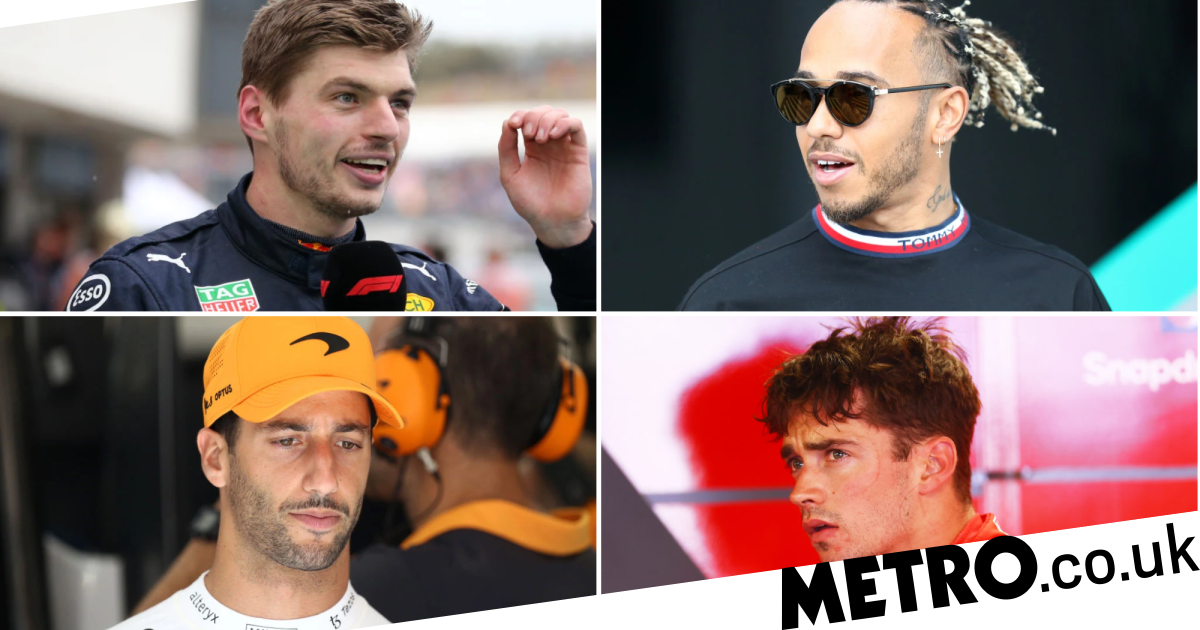 13 races down, the Formula 1 season is now on its month-long summer break, which will give the drivers and teams enough time to relax and recharge ahead of the final nine races of 2022.

It also gives Metro.co.uk time to reflect on what has been an interesting season so far, with the brand new cars producing some exciting racing, although thanks to the appalling decisions made by one team (we’re looking at you, Ferrari) a meaningful title fight has not materialised.

We’ll be giving every driver who has raced this season a rating out of 10 which will be based on their performances relative to the cars they’re driving:

With eight wins and an 80-point lead in the championship, this is Verstappen’s title to lose and while he has certainly benefitted from Ferrari’s multiple implosions, the Dutchman has barely put a foot wrong all season and that’s what has allowed him to build the advantage he has.

Only three times this season has he failed to finish on the podium (all of them as a result of mechanical issues) and the reigning champion has thankfully added a new level of maturity to his driving (bar the occasional team radio outburst).

On pace alone, Leclerc is the quickest driver on the grid, as evidenced by his seven pole positions, and in truth he should be the one leading this championship.

Sadly, a combination of Ferrari’s strategy blunders, the poor reliability of his F1-75, and two costly crashes in Imola and France, has robbed him of numerous wins and podiums, but you can hardly blame the Monegasque for his team’s mistakes.

Perez is doing exactly what Red Bull have asked of him: challenge at the top… just don’t beat Verstappen.

A brilliant victory in Monaco suggested that he could be a title contender, and while that hasn’t come to fruition, he has consistently got onto the podium and should have also won in Spain had he not been ordered to move aside for his teammate.

At Williams, Russell was dubbed Mr Saturday for his incredible qualifying pace, but at Mercedes he has become known as Mr Consistency, having finished in the top five at every race bar the British Grand Prix where he crashed out at the first corner.

The W13 may be handful to drive, but by dragging it to fourth in the standings – ahead of his seven-time world champion teammate and a Ferrari – the young Brit is proving why he is the most exciting driver on the grid.

After beating Leclerc last year, it’s strange to see Sainz struggling so much in comparison to his teammate in 2022, although he too has suffered from some serious bad luck.

A way overdue first pole and victory in Great Britain was brilliant but ultimately Sainz just hasn’t been on the same level as Leclerc and Verstappen, and now he faces an uphill battle just to finish in the top three.

After an abysmal start to the season, where the term ‘porpoising’ was starting to dominate all the headlines, Hamilton has battled back from back pains to finish on the podium at the last five races.

This is the first time in a decade where he hasn’t been able to challenge for the title and while that is frustrating, he’s doing an admirable job with what he’s got and recent performances suggest he’ll be able to win a race before the year’s out.

The only driver not from the big three teams to step on the podium so far in 2022, Norris continues to showcase why he is so highly-rated, but if he is to remain best of the rest, McLaren need to up their game.

Perhaps the most underrated driver of the year, Ocon has been quietly and consistently racking up the points, failing to finish in the top 10 on only three occasions, and is Norris’ most likely challenger for the best of the rest trophy (not that it actually exists).

When Bottas decided to head to Alfa Romeo after Mercedes replaced him with Russell, everyone assumed that he would simply fade into obscurity, but instead the Finn has put in spirited performances to help his team climb up the order, with an impressive fifth at Imola proving his critics wrong.

A tad harsh perhaps, given that the two-time world champion has the edge on his teammate in qualifying, with an outstanding P2 in the rain at Canada proving the 41-year-old still has it, but Sundays just haven’t been kind to Alonso, and now he’s made the bizarre decision to swap Alpine for Aston Martin for 2023.

The biggest surprise of 2022, Magnussen wasn’t even meant to be racing this year, but was re-signed for Haas after Nikita Mazepin’s infamous exit just before the season began.

He grasped the opportunity with both hands, finishing fifth at the opening race in Bahrain, and while he still tends to get tangled up in plenty of incidents, his overall pace has been rather special given the circumstances.

The mysterious decline of Ricciardo has sadly continued this season and while the Australian has vowed to fight on and get back to his best, the simple fact is that he’s 57 points behind Norris, and if McLaren lose out to Alpine in the constructors’ table, it’ll be because of him.

It should be noted that the AlphaTauri AT03 isn’t up to the standards of its predecessors and that may be why the hugely-rated Gasly has looked far from his best, but even so its been a very underwhelming season for the Frenchman who had been tipped for a move to a bigger team.

This is to be Vettel’s last season in F1 after the four-time champion announced his retirement and while he isn’t going out with a bang, Aston Martin will certainly miss his skills and experience, especially given the way he’s been able to get the AMR22 punching above its weight.

Nine races in, Schumacher would have received a 1 or 2 on account of the many crashes the young German had been involved in, but at Britain and Austria we saw what he was truly capable of in the brilliant duels with Verstappen and Hamilton, with shades of his legendary father Michael visible in his racing.

Tsunoda’s fiery temper and often combustable driving style has calmed a little since his rookie campaign but not enough, and with his car underperforming, the young racer has tried a little too hard at times to make up time, crashing into his teammate at Silverstone his most notable blunder.

Five points compared to Bottas’ 46 may look terrible (it’s certainly not great) but for a rookie, Zhou has had a solid start to his F1 career, although he’ll probably be best remembered for his horrendous crash at Silverstone.

Stroll is an easy target given that his seat is never at risk thanks to his father Lawrence owning the team, but his lacklustre performances this campaign do give his critics plenty of warranted ammunition, and with over five years of F1 experience he can no longer use youth as an excuse.

Sadly, Williams find themselves yet again far behind every other team, though that hasn’t stopped Albon from dragging the FW44 into the points on two occasions, and while not he best show of his talents, it is great to see the Thai driver back on the grid after he was axed by Red Bull.

The only full-time driver to not have scored points so far, Latifi just isn’t up to the task of being an F1 driver, although he has gained some fans thanks to his surprisingly good performances in wet conditions.

Coming in as a last-minute replacement for Vettel for the opening two races after his fellow German had caught COVID-19, Hulkenberg performed admirably, even beating Stroll in Saudi Arabia, much to the Canadian’s embarrassment.

MORE : Oscar Piastri denies that he will race for Alpine next year – just hours after they announced that he would replace Fernando Alonso