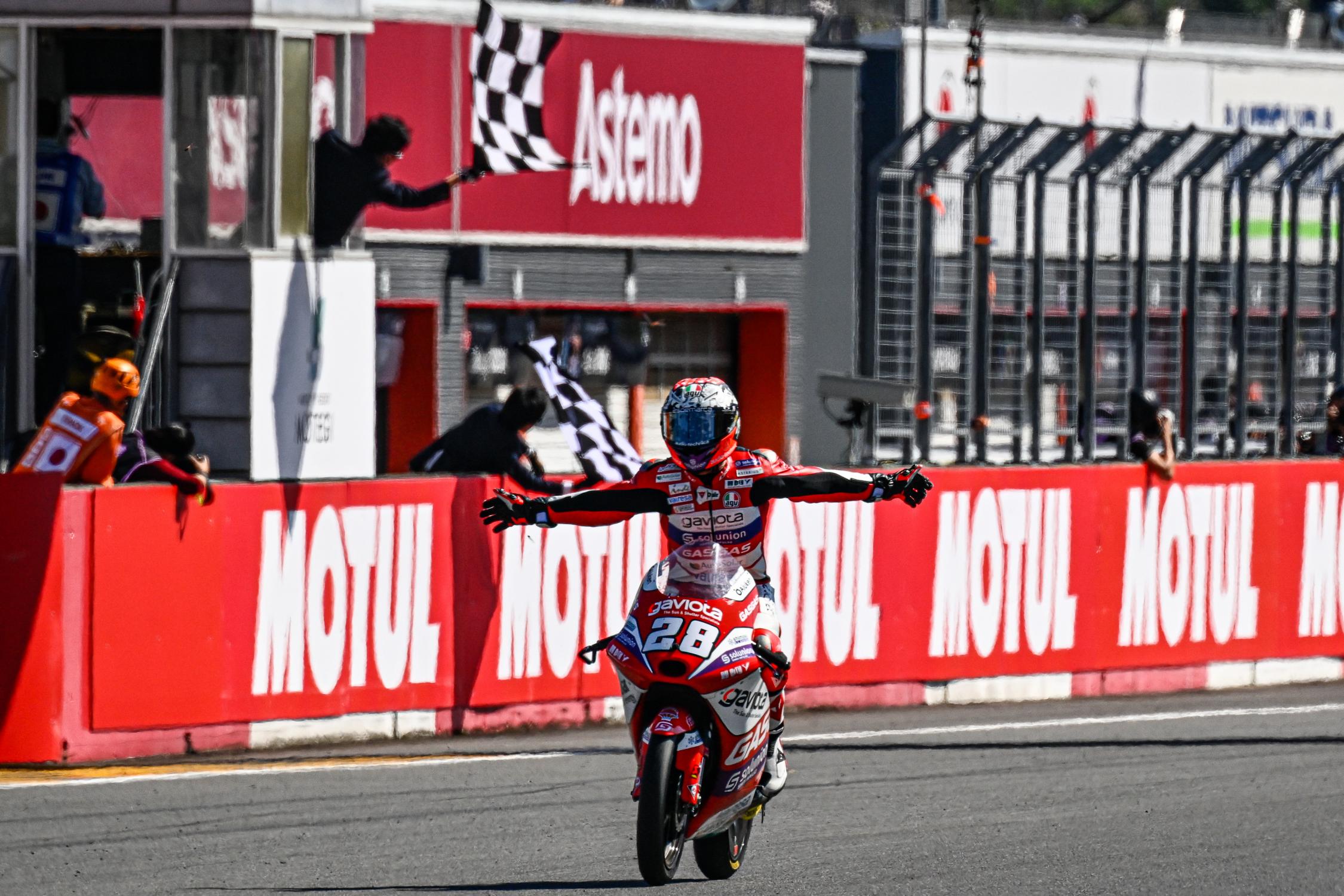 Izan Guevara made it back to back wins in Moto3, extending his championship lead to 45 points over teammate Sergio Garcia.

It was a rocky start to the weekend for Guevara as the conditions in Japan proved tricky. The Spaniard had never raced at Motegi and a huge crash during Sunday’s warmup had the Aspar mechanics working hard to repair his bike in time for the race.

Guevara lined up on row three after a mediocre qualifying session by his standards. Japanese rider Tatsuki Suzuki had secured pole position, he was joined on the front row by Visiontrack’s Scott Ogden and Garcia.

As the lights went out, Garcia got a great launch and immediately started challenging for the lead as chaos ensued behind him. Australian rider Joel Kelso had a big crash at turn nine collecting Josh Whatley in the process, before Carlos Tatay and Kaito Toba fell at the following corner.

It was an incredible start from Guevara who made short work of his peers, taking the lead at the beginning of lap two. Ayumu Sasaki and Dennis Foggia latched onto the back of the Spaniard, who immediately set about breaking away from the rest of the pack.

Sasaki and Guevara exchanged the lead back and forth while the riders behind struggled to stay upright. Kanta Hamada, Dani Holgado, Suzuki and Adrian Fernandez all fell from their bikes. Ogden was fighting in the points places before running wide at turn 9, dropping to the back of the field.

By lap eight the leading trio were joined by Jaume Masia who was the fastest man on track. Garcia meanwhile was beginning to lose ground on the leaders and was swallowed up by a second group, consisting of Diogo Moreira, John McPhee and David Muñoz.

With the leaders effectively riding in formation, a fierce battle was underway in the chasing group. Garcia jostled for position with Moreira, McPhee and Muñoz, while his championship rivals pulled away.

On lap 17 the situation at the front intensified. Masia moved up to second place, Foggia followed him past Sasaki who dropped to fourth as Guevara tried to make a break from the group. Masia, desperate to stay within striking distance of the leader, had a huge highside between turns 12 and 13.

With Masia out, Guevara was infallible in the closing laps. The Spaniard took the chequered flag for the fifth time this season and now has a firm grip on the Moto3 title. Foggia crossed the line in second, and Sasaki became the first Japanese rider with a home podium since 2009.

Garcia managed to salvage fourth place but with just four races left this season, it will take something special for him to win the championship.