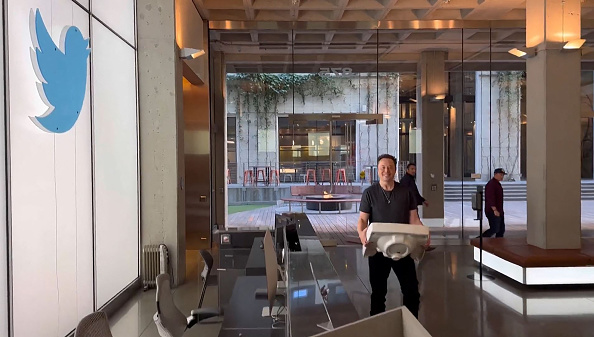 The future of one of the Bay Area’s most influential — and unprofitable — companies is in the hands of a man seen by some as a genius and by others as a madman. For now, chaos reigns at Twitter, with thousands of workers abruptly ousted Friday and advertisers wary of new owner Elon Musk’s plans for the social media giant. “What’s he going to do? No one knows,” said Steve Blank, a Silicon Valley tech-industry guru and adjunct professor of management science and engineering at Stanford University. Musk’s $44 billion leveraged buyout and privatization of Twitter last month saddled the company with $13 billion in debt. On Friday, Twitter, which has lost money for eight of the past 10 years, began a massive layoff that could amount to some 3,700 jobs, or half the San Francisco-based firm’s global workforce, according to many reports. Musk on Friday afternoon tweeted about the workforce reduction, saying “unfortunately there is no choice” because the company was losing more than $4 million per day. Twitter, in its most-recent quarterly regulatory filing, reported a loss equivalent to $3 million per day. The job cuts, combined with a plan by Musk to charge users $8 per month for verification, and his earlier statements about allowing anyone to tweet anything as long as it’s legal, have created a deep sense of uncertainty about the platform and the company’s future. The Bay Area Council described Friday’s layoffs as “troubling” amid widespread job cuts at the region’s tech firms but called Musk’s move “an internal business decision.” Musk said laid-off employees were offered three months’ severance pay. The Silicon Valley Leadership Group, a business-backed policy and advocacy organization, said Friday was a “tough day for so many incredibly talented people at Twitter.” But it took a neutral stance on changes at the company under Musk. “Disruption has long been a hallmark of the Silicon Valley economy, which brings with it highs and lows,” the group’s CEO Ahmad Thomassaid. Blank cited Musk’s successes with electric car maker Tesla and Southern California rocket maker SpaceX — both world-leading companies — but also called the new Twitter chief “the world’s most anti-social person.” Twitter needed a “re-invent” because it was “bloated” and “unmanageable,” Blank said. “It’s not clear whether this is the right re-invent or this is the right person to do the re-invent, but he certainly has the track record of seeing things when others didn’t.” Musk, the world’s richest man, with a net worth of $190 billion according to Bloomberg, is beloved by legions of fans who admire his innovations and contrarianism. He’s also hated passionately by many opposing his right-wing politics and defiance of laws and social norms. His wealth and notoriety have put a global spotlight on his purchase of Twitter, a hugely influential platform used by hundreds of millions around the world, including ordinary people, celebrities and government leaders. If Musk runs Twitter mainly to maximize profits and it becomes a platform toxic to users and advertisers, he risks sending users to another social media company, Blank said. Musk’s own actions have raised concerns about such toxicity, with past tweets from his account including an Adolf Hitler meme and a sexist acronym and one this past weekend promoting a fabricated account by a notorious publisher of false news about the attack on House Speaker Nancy Pelosi’s husband, Paul. Faced with a multi-billion-dollar debt from the start of his Twitter ownership and the company’s history of losses, Musk has announced a plan to charge users $8 a month for the “blue-check” verification the platform has used to help validate purportedly reliable information sources. The plan further ramped up worries, including among the advertisers who will be key sources of Twitter’s revenue, that it will degrade into a cesspool of misinformation where abusers and purveyors of propaganda have free rein. In the past, verification has helped users distinguish real information from fake; if it is used only for people who pay, that distinction may vanish. In a Friday tweet, Musk blamed “activist groups pressuring advertisers” for what he described as a “massive drop” in advertising revenue. But some companies that recoil at having their ads associated with content offensive to their customers have been paying close attention to what Twitter’s new owner has been saying and have been modifying their advertising budgets accordingly. Related Articles Technology | “No choice” except massive Twitter layoffs due to red ink: Elon Musk Technology | Elon Musk’s Twitter investors include Saudi Prince, Jack Dorsey and Qatar Technology | Tesla CEO Musk’s Twitter bid: trolling or true? REI, the outdoor-gear giant with nine Bay Area stores, said Friday in response to questions about its Twitter advertising that it has “committed to becoming a fully inclusive, anti-racist, multicultural organization.” The company cited “the uncertain future of Twitter’s ability to moderate harmful content and guarantee brand safety for advertisers” in its decision to pause ad spending and marketing posts on Twitter while it awaited “further information about the future of the platform.” Volkswagen Group, which owns Volkswagen and other car companies including Porsche, Audi, Lamborghini and Bentley, said Friday that in response to Musk’s plan to relax content rules, it has “recommended to its brands to pause their paid activities on the platform until further notice.” VW spokesman Jens Katemann said the company was “closely monitoring the situation and (would) decide about next steps depending on its evolvement.” Late Friday afternoon, after right-wing pundit Mike Davis urged Musk in a tweet to “name and shame the advertisers who are succumbing to the advertiser boycotts” so they could be subjected to “counter-boycott,” Musk responded, “A thermonuclear name & shame is exactly what will happen if this continues.”