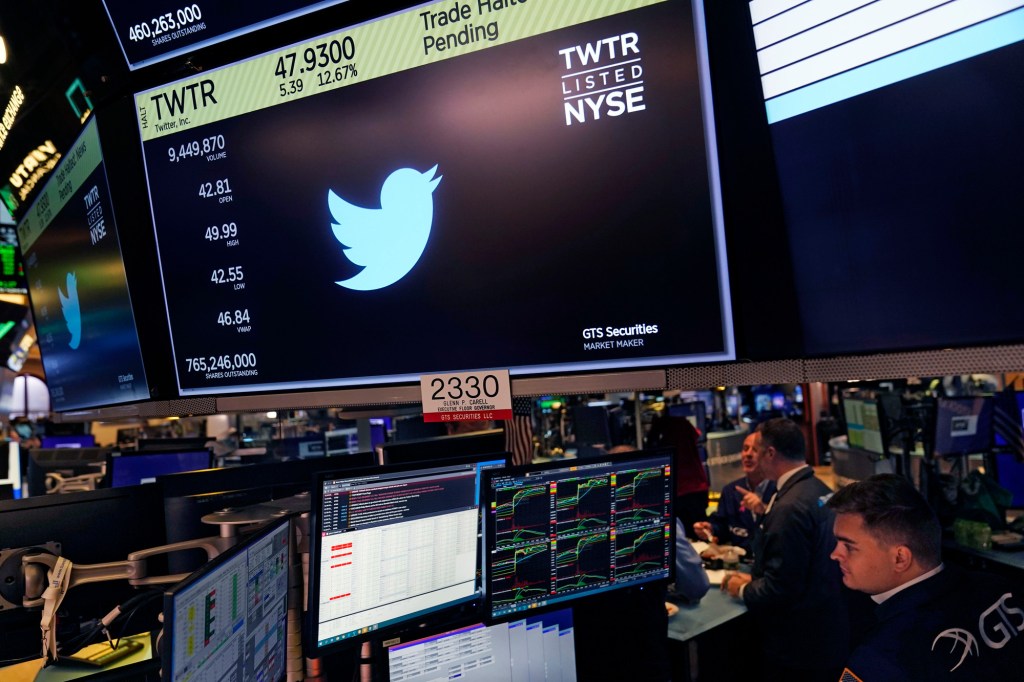 By Tom Krisher, Matt O’Brien and Randall Chase | Associated Press Trading in shares of Twitter was halted after the stock spiked on reports that Elon Musk would proceed with his $44 billion deal to buy the company after months of legal battles. For a second time, Musk offered to buy the San Francisco company at $54.20. Twitter’s stock jumped nearly 13% to $47.93 before trading stopped on the New York Stock Exchange, which listed “news pending” as the reason for the halt. Trading halts are how stock exchanges give investors a forced timeout when trading for a stock gets too chaotic, or when a company is about to offer market-moving news. Bloomberg News reported Tuesday that Musk made the proposal in a letter to Twitter, according to people familiar with the case who were not identified. Musk has been trying to back out of the deal for several months after signing on to buy the social media platform in April. Shareholders have already approved the sale, and legal experts say Musk faced a huge challenge to defend against a Twitter lawsuit, which was filed in July. Musk claimed that Twitter under-counted the number of fake accounts on its platform, and Twitter sued when Musk announced the deal was off. Neither Twitter nor lawyers for Musk responded to messages seeking comment on Tuesday. The trial seeking to compel Musk to buy Twitter is set to start in Delaware Chancery Court on Oct. 17. Musk’s argument for walking away from the deal has largely rested on the allegation that Twitter misrepresented how it measures the magnitude of “spam bot” accounts that are useless to advertisers. But most legal experts believe he faced an uphill battle in convincing Chancellor Kathaleen St. Jude McCormick, the court’s head judge, that something changed since the April merger agreement that justifies terminating the deal. By going through with the deal, Musk essentially gave Twitter what it was seeking from the court — “specific performance” of the contract with Musk, meaning he would have to go through with the purchase at the original price. The contract Musk signed also has a $1 billion breakup fee. Eric Talley, a law professor at Columbia University, said he’s not surprised by Musk’s turnaround, especially ahead of a scheduled deposition of Musk by Twitter attorneys starting Thursday that was “not going to be pleasant.” “On the legal merits, his case didn’t look that strong,” Talley said. “It kind of seemed like a pretty simple buyer’s remorse case.” If Musk were to lose the trial, the judge could not only force him to close the deal but also impose interest payments that would have increased its cost, Talley said. What did surprise Talley is that Musk doesn’t appear to be trying to renegotiate the deal. Even a modest price reduction might have given Musk a “moral victory” and the ability to say he got something out of the protracted dispute, Talley said. Wedbush analyst Dan Ives wrote in a note to investors that Musk’s latest offer is a clear sign that he recognized his chances of winning were slim. “Being forced to do the deal after a long and ugly court battle in Delaware was not an ideal scenario, and instead accepting this path and moving forward with the deal will save a massive legal headache.” Among the remedies that would favor Twitter is a court order to go through with the deal. The Chancery Court last year forced private equity firm Kohlberg & Co. to go through with its $550 million buyout of DecoPac, a company based in Minnesota that calls itself the world’s largest supplier of cake decorating supplies to professional decorators and bakeries. The case was emblematic of the court’s common — though not uniform — resolution of enforcing contractual obligations on buyers. Related Articles National News | U.S. Supreme Court to hear cases that could decide future of internet speech and social media National News | California becomes 1st in U.S. with law protecting children’s online privacy National News | Twitter shareholders approve Elon Musk’s $44 billion buyout as trial looms National News | Judge: Elon Musk can’t delay case, may use Twitter whistleblower Other options include Musk being forced to pay the breakup fee each side agreed to if deemed responsible for the deal falling through. Or he might have to pay off a larger amount without actually buying the company for $44 billion. Legal experts have said that Delaware courts have been picky about interpreting what counts as a valid reason for backing off of a deal. The gap between what Musk knew about Twitter when he made the offer in April and the state of the company today had to be huge, and there’s little evidence of that, one lawyer said.