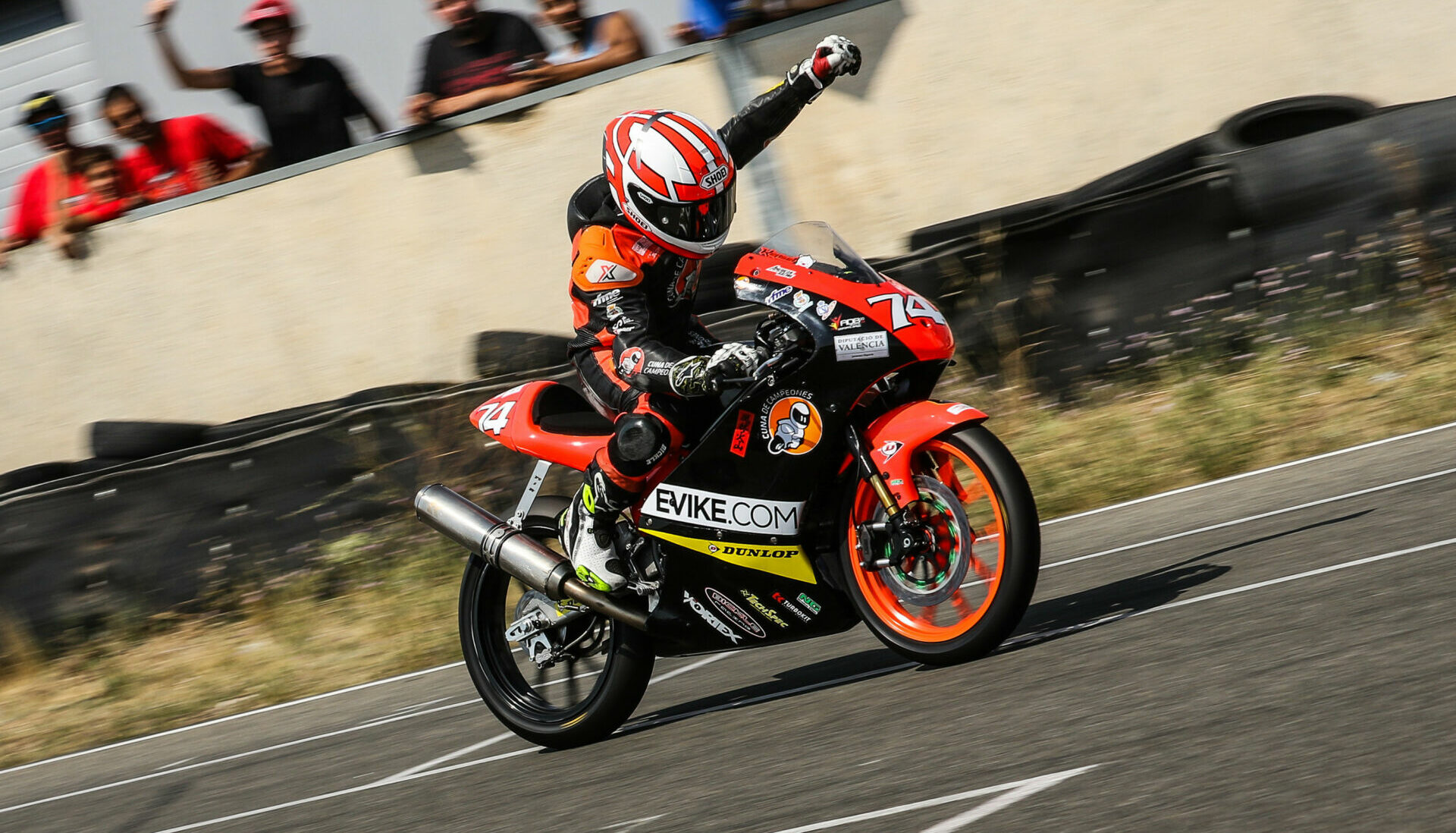 Kensei Matsudaira takes 2nd in the Copa de España de MiniVelocidad Spanish national Moto5 Championship After four rounds and eight races of intense racing, this past weekend [August 13-14] saw the conclusion of the RFME (Real Federación Motociclista Española) Copa de España de MiniVelocidad Spanish national championship, with Japanese-American Kensei Matsudaira taking second in the Moto5 championship. Kensei started the season at DR7 Circuit in Tarancón with two P8 finishes. In round two at Zuera International Circuit in Zaragoza, he had a DNF crashing out of the lead in Race One, but achieved his first podium with a P3 finish in Race Two. At Kotarr Circuit in Burgos, Kensei would get his first victory in the category, followed by a P2 finish. At the final round of the championship held this past weekend at As Pontes Circuit in A Coruña, Kensei finished with a P2 in the first race, and a DNF out of the lead in Race Two. In the end, Kensei achieved four podium finishes including a victory and was able to finish second out of 22 riders in the highly competitive Copa de España de MiniVelocidad national championship of Spain. His season is not over yet as he still continues to compete in the Cuna de Campeones seven-round championship, with the final two races taking place in September at Circuit Ricardo Tormo in Valencia, Spain and in October at Circuito de Jerez – Ángel Nieto in Cádiz, Spain. “It’s really special to be able to finish so well in the championship with Moto5 since it’s a completely new experience for me moving to the bigger bikes this year,” Kensei said. “I know it’s always competitive in Spain, and looking at the lap times I know it’s one of the most competitive years so to be right there fighting with these guys at the top, I’m really happy and looking forward to continue racing here. Thank you to my team, family, and all my sponsors that make it possible.” Kensei would like to thank all of his sponsors for their support to help him race both at home and abroad: American Racing Team & Academy, Fresh N Lean, Evike.com, Shoei Helmets, Dave Designs, AGV Sport, VNM Sport, D.I.D Chain, Galfer USA, Yoshimura R&D, Suspension Matters, TechSpec, The Starting Grid, Moto Tecnica, Mad Labs Minimoto, 73 Moto Parts, Bickle Racing, Vortex Racing, Landers Racing, Boyko Racing, Apex Racing Center, Live 100 Moto, DRT Racing, Karen E. Ott Photography, Hans King, Moto Survival School, California Superbike School, and Toni Elias School USA. The post American Matsudaira Takes Second In Moto5 Spanish National Championship appeared first on Roadracing World Magazine | Motorcycle Riding, Racing & Tech News.